Democrats whine and complain that tax cuts to corporations don’t help the little guy. This could not be more wrong. We are starting to see proof that President Trump’s economic plan of tax cuts is bringing jobs BACK to America. Tax Reform is a must to bring our country back to prosperity. No doubt about it. “American Money Flowing Back into America” by Suzanne O’Halloran, June 26, 2018:

Despite President Trump’s tit-for-tat trade barbs, America’s CEOs are not wasting anytime in taking advantage of his tax reform plan. Over $300 billion was repatriated to the U.S. in the first quarter, according to the Bureau of Economic Analysis (BEA) — the most on record.

“U.S. firms that used to build their factories overseas in order to avoid U.S. taxes, they stopped in their tracks because of the tax bill, they are bringing all the money home,” said Kevin Hassett, chair of the president’s Council of Economic Advisers, during an interview on FOX Business’ Varney & Co. in June. 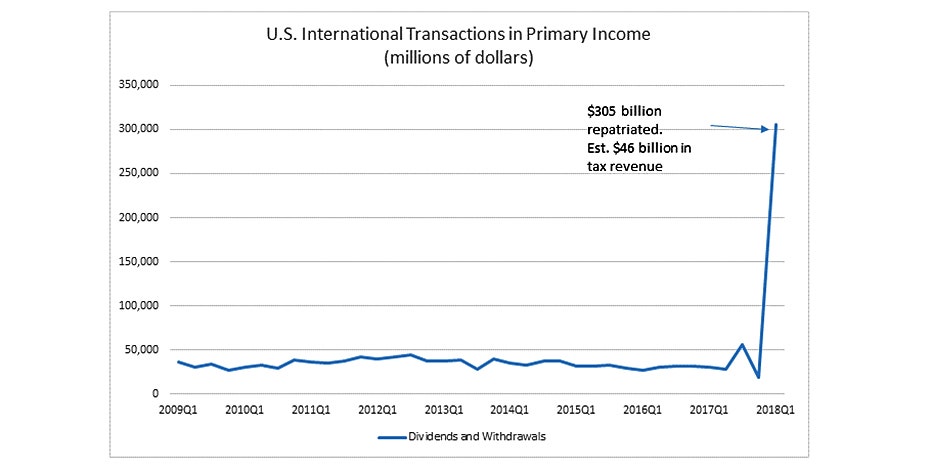 The BEA notes the main driver of the repatriation surge is that companies are no longer taxed on foreign earnings when returning the funds to the U.S. “We fixed that really, really stupid thing” said Hassett. By comparison just $38 billion was repatriated during the same period a year ago.

While the BEA keeps the names and sums of corporations repatriating confidential, the latest data appear to show CEOs are likely sticking to their pledge to bring more money earned overseas back to the U.S. promised shortly after the tax plan was signed by President Trump in late December 2017.

While it is not crystal clear how the lion’s share of funds returning to the U.S. will be used, pro-growth economists hope it will be used for hiring, boosting wages and other moves that will benefit the American worker and eventually trickle down to the broader economy. This is why many economists are boosting their GDP forecasts to between 3% and 4%.

Now, the last time repatriation funds saw a notable spike was in 2005, following passage the year before of the American Jobs Creation Act, which offered a tax holiday, among other tax benefits, under President George W. Bush. Yet, Mark Zandi, chief economist at Moody’s Analytics, tells FOX Business, at that time the benefit to the economy was minimal and will likely be the same this time around. “The repatriated cash will go to more stock repurchases, dividend increases, and paying for mergers and acquisitions.  All of this has no significant impact on the economy” he said.

However, there are some differences between then and now. Some of America’s biggest companies celebrated the tax reform plan in concert by offering one-time bonus payments to employees, along with enhanced benefits and other financial perks.  As an example, Apple, the nation’s largest taxpayer, announced in January it would invest over $350 billion in the U.S. economy over the next five years due to the tax changes. The maker of iPhones and iMacs also expects to pay $38 billion in taxes, which would be the largest payment of its kind, Apple stated at the time. Inquiries by FOX Business to Apple on its repatriation status were not returned.

Another factor to consider, many Republicans, including House Ways and Means Chair Kevin Brady, are pushing to make tax cuts permanent and perhaps rolling out even deeper tax benefits i.e. tax reform 2.0. That could create even more certainty for the nation’s business leaders.

Before tax reform was enacted in December 2017, U.S. companies had an estimated $2.6 trillion parked in overseas accounts, as tracked by the United States Public Interest Research Group.Opens a New Window.